Polish Community lost its noble man. Mr. Raymond Pierzchajlo – Auschwitz prisoner No. 12632 past passed away on May 14 2018 at the age of 98 years. 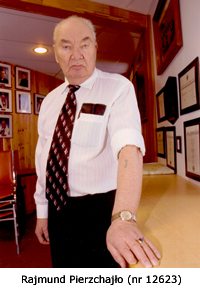 Raymond was born in Wilanow, Poland on
July 19, 1920 where the foundations of his life
began. In 1941 Raymond sacrificed his
freedom to help his brother escape from the
Gestapo. He was sent to Auschwitz where he
was known as prisoner 12623. After four
years he became one of the longest surviving
prisoners in Auschwitz – Buchenwald. Freed
by U.S. troops while on the Buchenwald death
march, he was down to just 90 pounds.
While living in Germany as a displaced person
he met Jadwiga who became his wife. In 1949
they immigrated to Canada to start a new life
and begin his service to his community. His
contributions and the honors he received are
numerous including the Pro Memorial medal
for the Republic of Poland and the Queen’s
Diamond Jubilee Medal. Despite all the
horrors he endured, he harbored no hatred in
his heart and always recognized how truly
blessed he was, never losing faith in God. He
served as a lesson to what it means to live
honorably and to find strength in the darkest
of places.